When to Use Dijkstra Algorithm?

Given a weighted graph, what is fastest way to compute the shortest path from a node to every other node? What we mean by weighted graph is that every edge is now assigned a weight that and our distance increases by the weight instead of 1. This problem means that our previous graph theory algorithms such as Vanilla Breadth First Search don't work anymore as they are designed for unweighted graphs. The previous algorithms assumed each edge was equal so only need to visit each node once. That no longer works as the first time we visit a node does not guarantee minimum distance and we may need to revisit the node if we find a shorter path. Is there a way to update them to account for weighted graphs?

The Shortest-Path Faster Algorithm abbreviated to SPFA can be thought of as a BFS variant. Instead of checking whether or not the neighbour node has been visited we instead see if we can improve our distance by checking the neighbor nodes and if it possible to update to a smaller distance and push the node into our queue. If it is greater then we want to update the node's distance since we have found a shorter path and push the node into our queue. This algorithm runs in worst case O(n * m) where n is the number of nodes in our graph and m is thg number of edges. Here is an implementation for how the Shortest-Path Faster Algorithm would work.

This algorithm works for smaller graphs and is easy to implement, so if you are in a rush and can afford to have a less efficient algorithm, you may want to use SPFA. Can we do better though?

The Dijkstra's algorithm uses of a priority queue to store nodes by the distance from our root node. When we pop a node and its distance, we know that the distance is the shortest distance from our source node to the node. And we update the distances of the neighbours of the node by decrease_priority to make sure the distances of other nodes in the priority queue is the shortest from source node. Each time we pop a node from the queue it takes time logarithmic to the size of the queue. Therefore, our final time complexity is O(nlog(e)) as maintaining the edges in the queue takes logarithmic time. Here is the pseudocode from wikipedia. 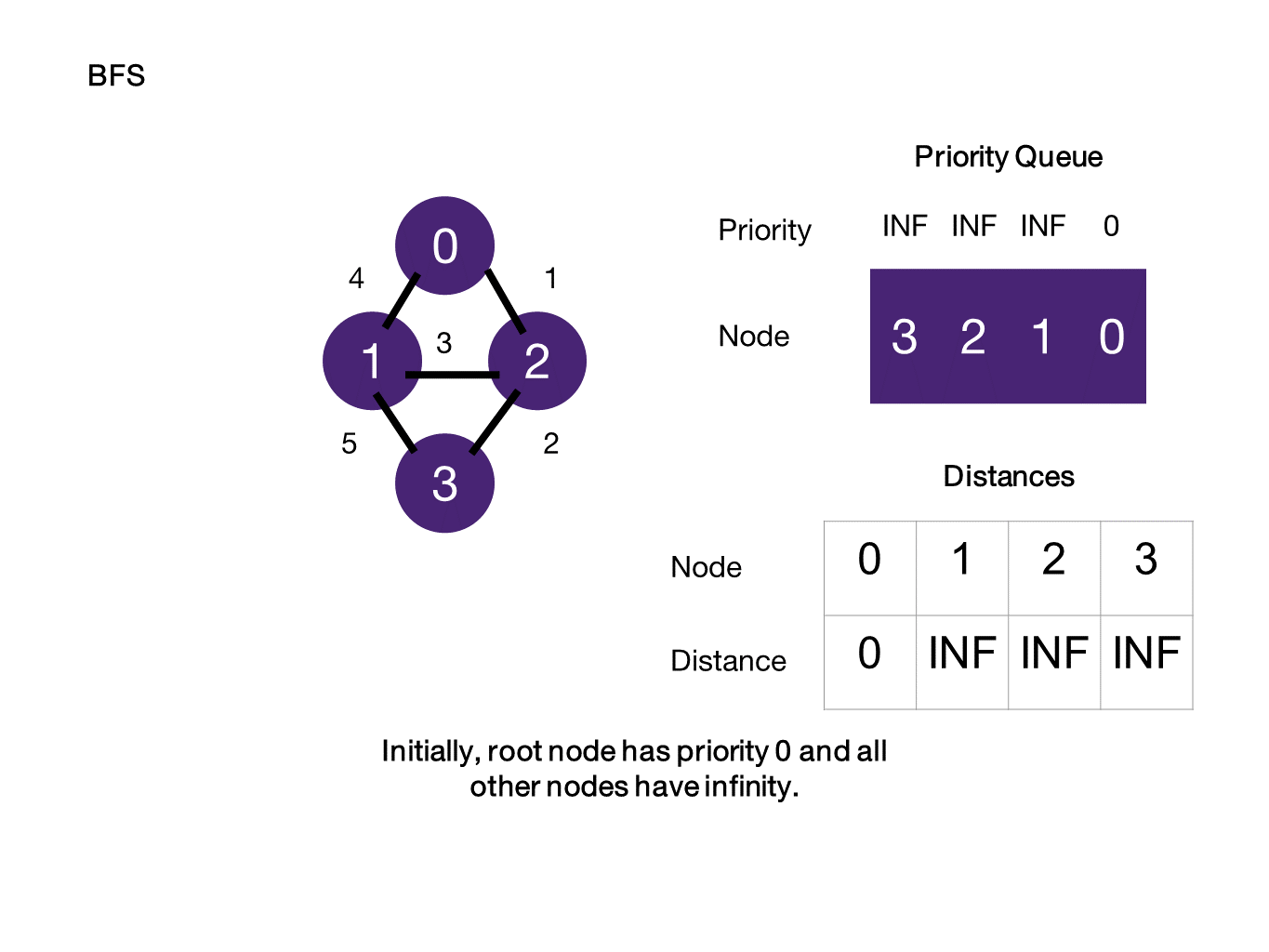 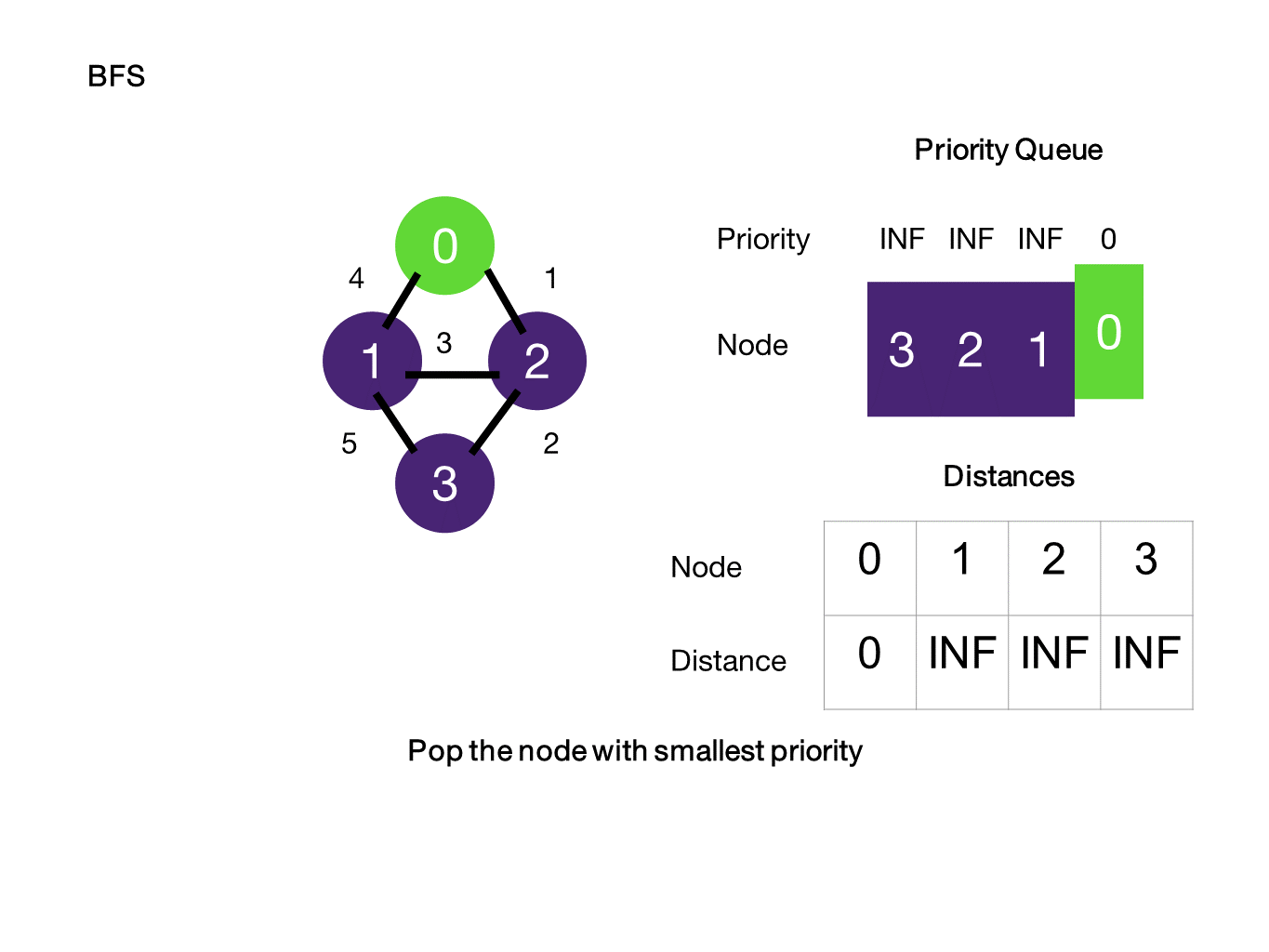 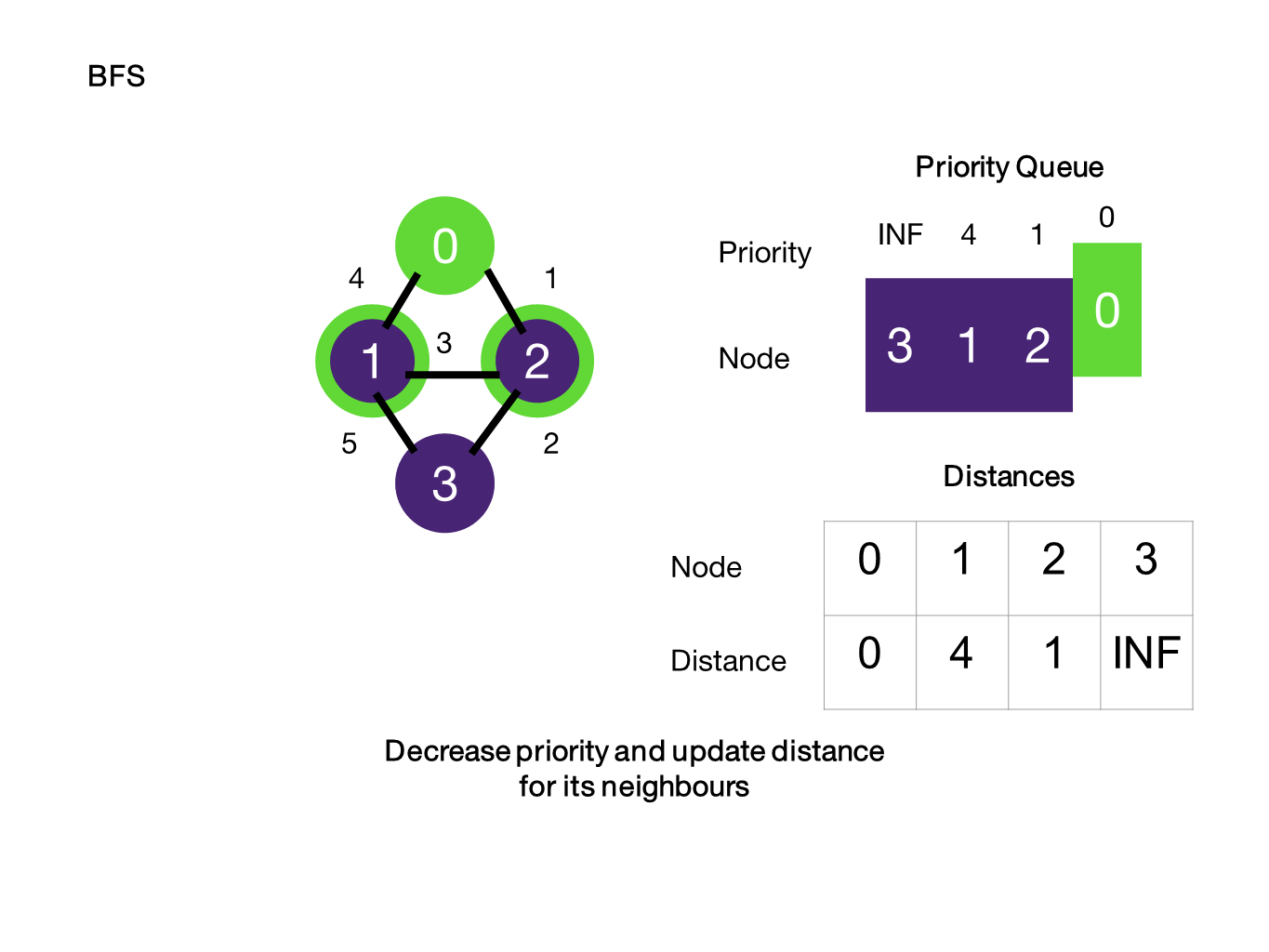 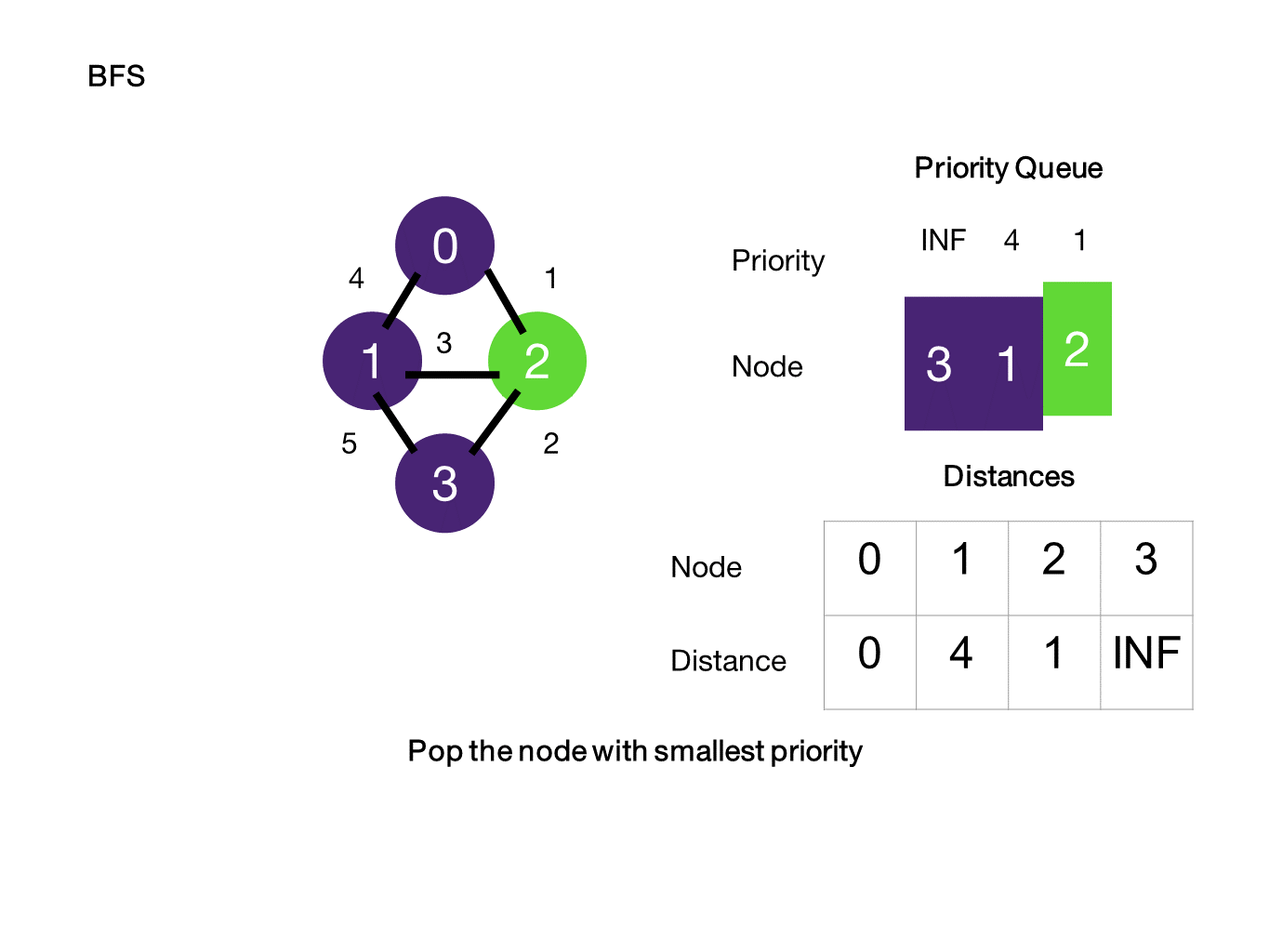 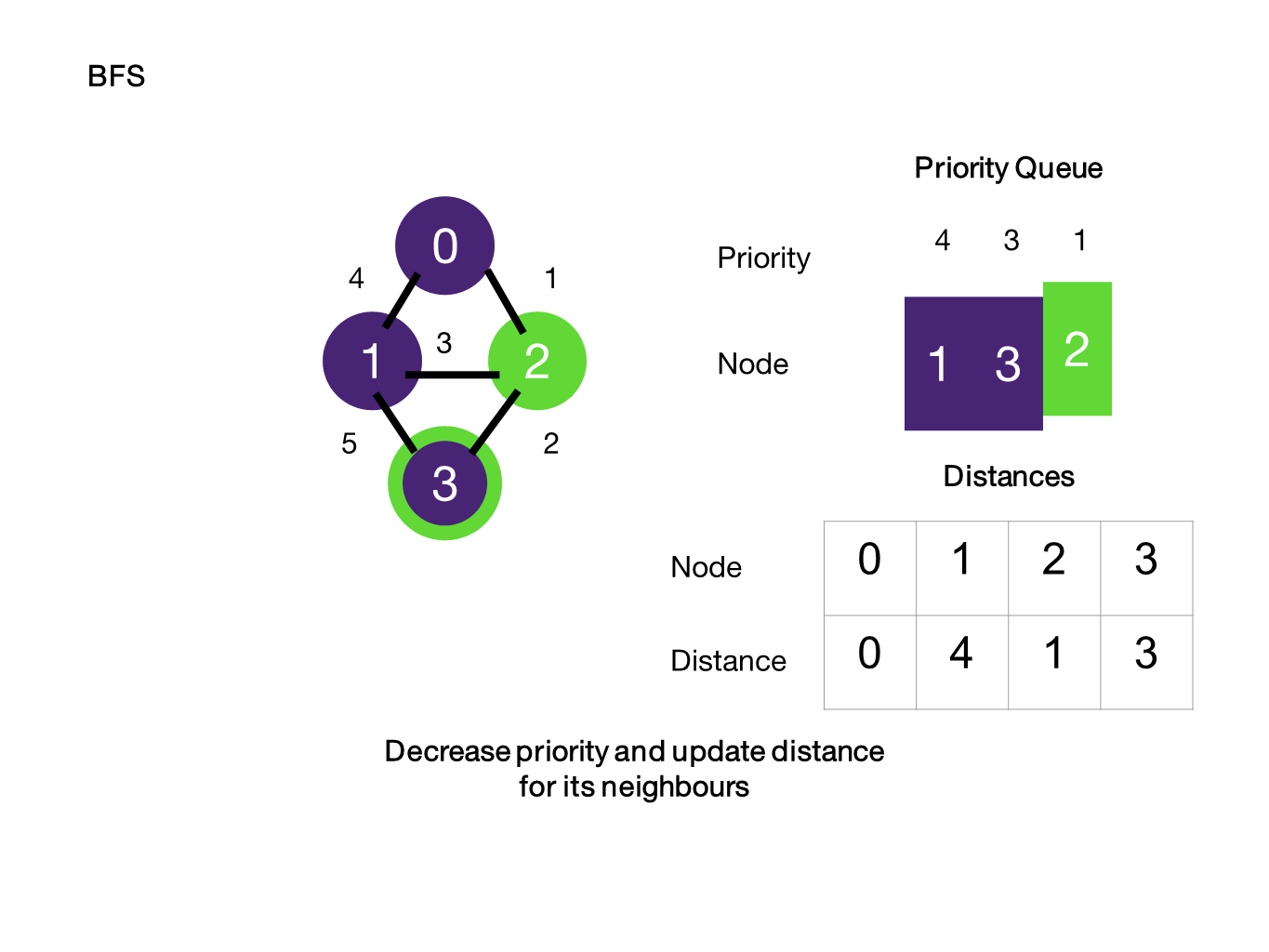 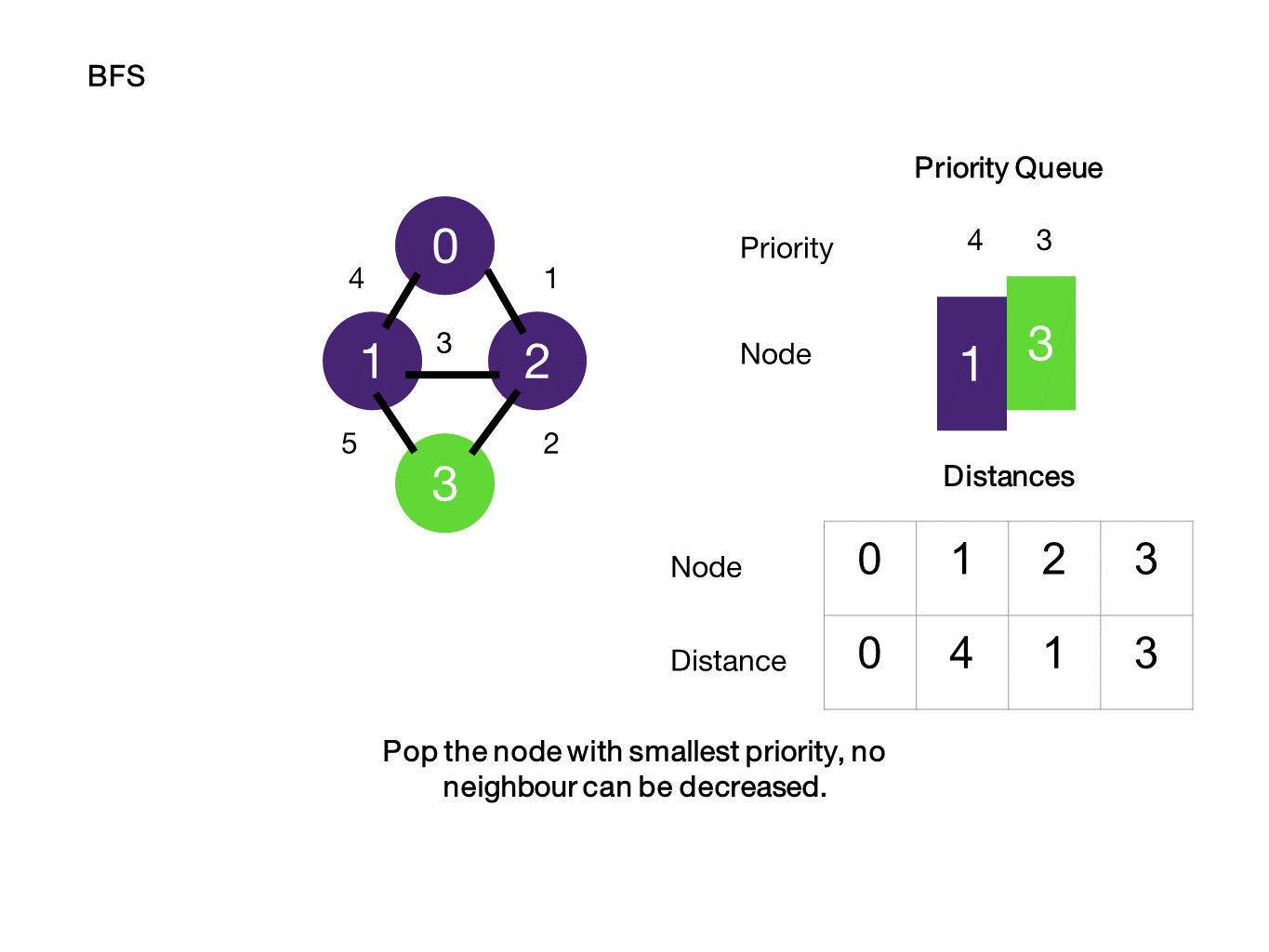 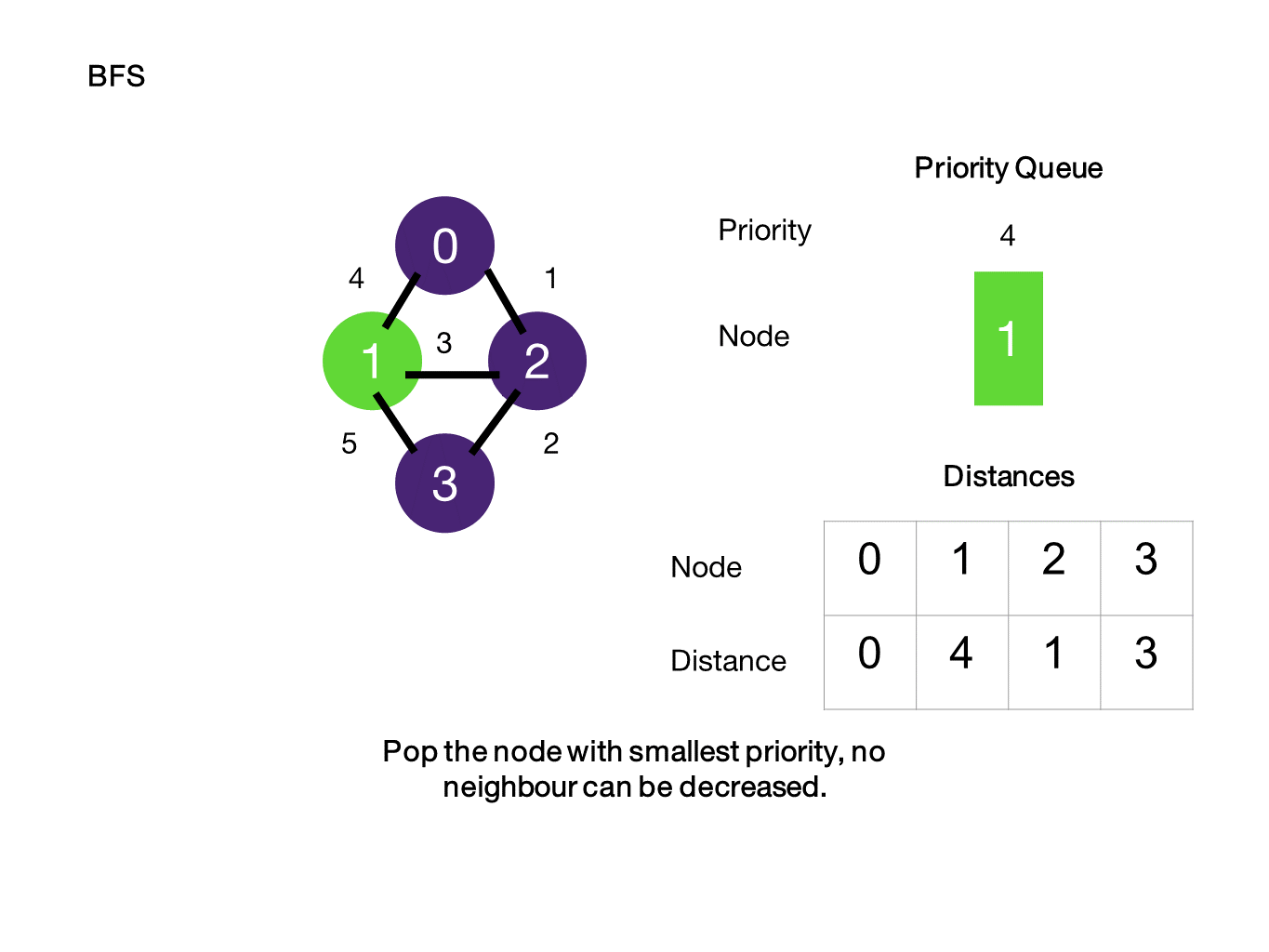 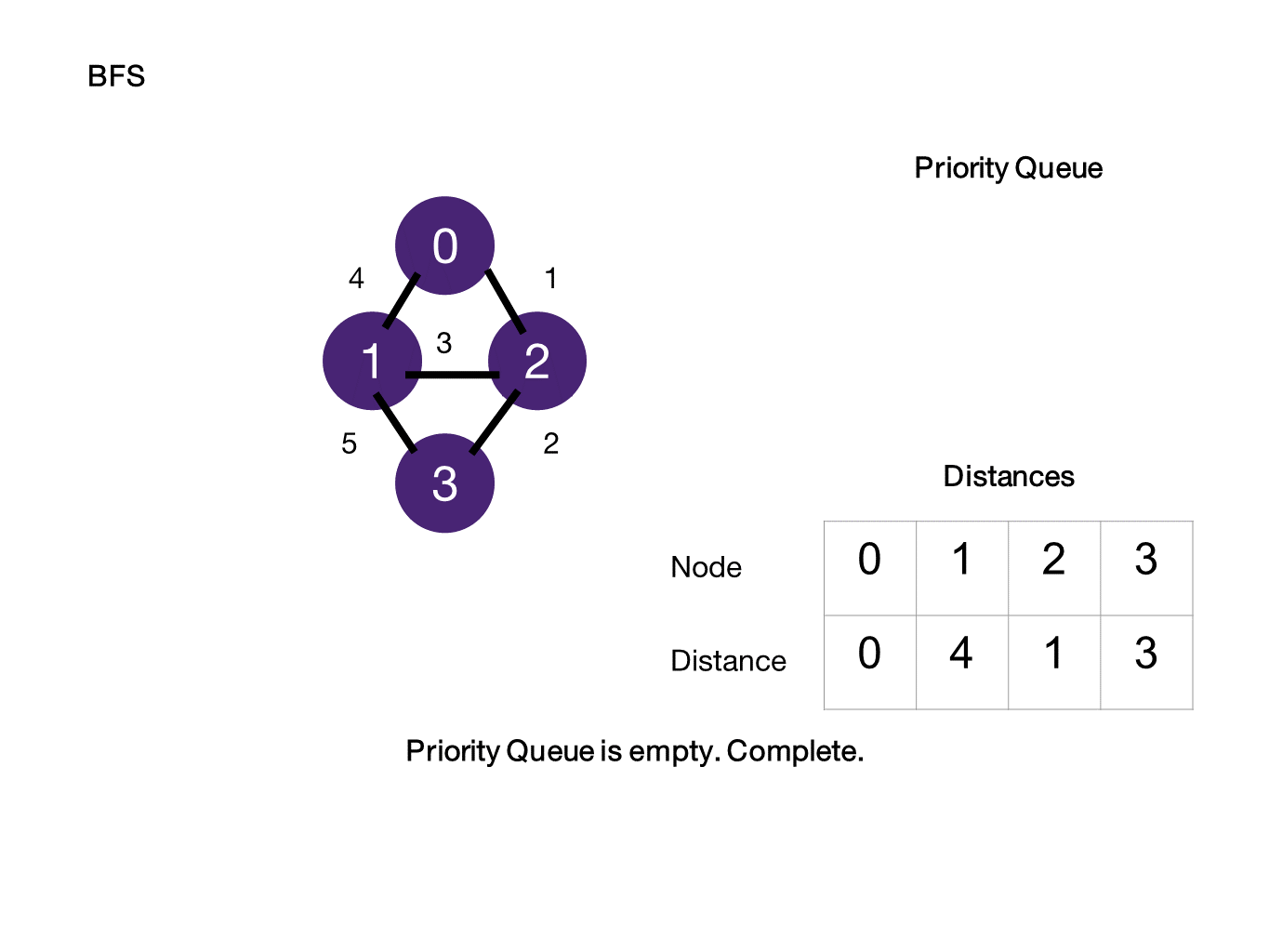 There are some optimizations we can do for dijkstra, that can improve the time complexity.

Moreover, this original version needs decrease_priority from Fibonacci heap, which is not easy to implement and not efficient in practice. Instead of updating the distances by decrease_priority, we can simply add the new distance of the node to the priority heap. When we pop the node with the old large distance, nothing will be updated and the result will be same.

Here is an implementation of this alternative Dijkstra's algorithm.

Instead of adding all vertices to the priority queue at the beginning, we can add new vertices as we checking the neighbours. This method is called Uniform Cost Search, which is useful when the graph is large or even infinite.

First of all, why would a graph have any negative weight in the real world? One example would be nodes representing account and edges representing money transfers and negative weights means transferring from target node to source node. It's easy to see Dijkstra's won't work with graphs with negative weighted edges because adding an edge means decreasing distance and this can go to negative infinity.

Do I Need to Know Dijkstra's Algorithm for Interviews?

Probably not. Dijkstra's algorithm is used to solve for a very specific problems - finding shortest path in a weighted graph. As we discussed in the introductory chapter, weighted graphs problems are not the most common in interviews. And asking a specific academic algorithm is even rarer. It's useful to understand the idea of Dijitra's algorithm and know when to use it. BFS and DFS 10x more important.