Since the goal of AlgoMonster is to help you get a job in the shortest amount of time possible in a data-driven way, we compiled datasets of tech interview problems and broke them down by patterns. This way, we can determine the most frequently tested and highest return on investment (ROI) area to focus on. We'll look at the breakdown for top problems overall and company-specific investigations.

Depth-first search(DFS), breadth-first search(BFS) and two pointers, make up a good portion of all interview problems. DFS in particular can be used to solve a wide range of problems from tree to graph to combinatorial problems and is very useful in tech interviews. We have a detailed explanation on each of these topics.

Priority queue and heap show up surprisingly more often than most would think. The classic problems include the median of a data stream, k closest points.

Dynamic programming (DP) is hard to summarize and does not frequently appear (unless you are interviewing Google, whose engineers like to ask DP problems). There are a few classic problems you may want to know such as house robber and robot paths. Otherwise, you should probably focus on higher ROI areas if you are short on time. Also, if you can't figure out a dynamic programming solution, you can always do DFS + memoization which does the same thing.

Each greedy problem is different, and it's hard to summarize a pattern, and the correctness of your solution often requires rigorous mathematical proof that is hard to learn in a short time. Therefore, we consider the greedy problem to be low ROI.

These don't appear often but do show up. Consider them of secondary priority.

You may have noticed there is a category called "basic programming.” We use this to denote problems that don't fit into any category and are pretty straightforward that you can practice yourself or code-to-specifications problems. This makes up a good portion of all interview problems. You don't need any prior knowledge other than a basic programming concept to solve them, and we don't cover them in this course since you can learn them and practice yourself.

We created an ROI table based on the above analysis for your reference. 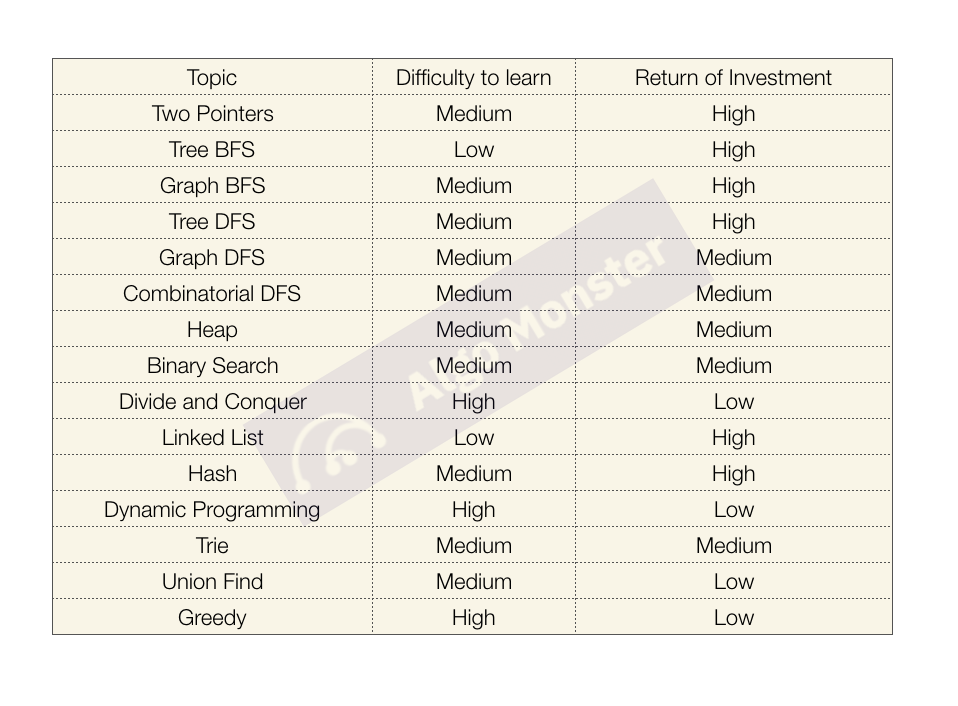 Amazon's interview problems haven't changed much since the Cracking the Coding Interview days. Two-pointers, DFS, and BFS make up half the problems. Since the existence of the performance improvement plan, it's relatively easy to fire employees. So the interviews are not intended to be very difficult.

Meta likes to ask classic problems and is generally slightly more challenging than Amazon. Word on the streets is that the company cares more about bug-free coding than anything else. Two-pointers, DFS, and BFS still dominate. If you are interviewing Meta, it's good to practice the classic problems we have in this course multiple times.

Google has an internal policy of not using any problem found on the internet for interviews. Therefore, the engineers constantly reinvent new problems, making the interview more difficult (or easier depending on how you view it since invented problems are often as well-thought-out as classic problems). Some problems require more than one pattern, e.g., prefix sum + binary search, DFS + prefix sum. You have to be very familiar with the basic patterns we have in this course.

These companies have a fixed set of problems and don't usually update them. If you master the patterns we teach in this course, you should be able to solve them with ease.

Unicorn startups like Airbnb, Uber, and Dropbox have a relatively stable problem bank compared to Google, and the problems are more challenging than Amazon. Classic patterns like DFS, BFS, two pointers are still the favorite. You may need to know Trie and union-find, too.

A Note On Academic Algorithms

We use the term "academic algorithms" to mean algorithms that are taught in university textbooks and are not tested often, if ever, in real-world tech interviews, according to our statistics. A good-enough rule of thumb is an algorithm named after a person(s) you can safely ignore.

Knuth−Morris−Pratt (KMP) algorithm helps solve string problems, but interviewers will NOT expect to know how to do this. Typically bug-free brute force coding is required instead of KMP.

Dijkstra's algorithm helps find the shortest path between nodes in a weighted graph. Weighted graphs interview problems exist but are rare. It's good to have a high-level understanding of this algorithm since it uses a priority queue that frequently gets asked.

Reference: you can find the data source here.

Get started on the highest ROI patterns!

Still not clear? Submit the part you don't understand to our editors.